The entrance to Mainit Springs

I let the cold drizzle kiss my face as I engulfed the fresh and salty air from the sea. I stared at the boats gathered at the whale watching site in a distance, trying to replay every detail of my close encounter with the whale sharks. The adventure could have ended on these shores but we wanted to see more of Cebu.
We had planned to visit a nearby waterfalls but locals have told us this might not be a good time. The weather had been very moody, bringing occassional rains that could spoil a trek. We opted to try the hot springs at Malabuyoc which would take more than an hour’s travel from Oslob.

A waterfall near Mainit Springs

Upon reaching Bato bus terminal, we negotiated with motorcycle riders who had ferried us to the site. I advice you to better rent a car when visiting every tourist spot in Cebu because public transportation can be more costly. Travel time from Bato to Brgy. Montaneza in Malabuyoc would take almost an hour. 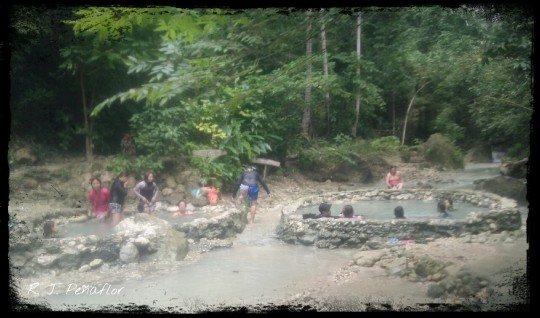 The Mainit Springs (which is derived from the Tagalog word “hot”) is located in a dense forest filled with coconut trees. These sulfur springs are placed near a dormant or extinct volcano (whichever version you might hear). Entrance fee is only at Php20 and the site open from 6 am to 5 pm.

The four springs come in varying degrees of heat. The coolest was at 36 degrees while the hottest was at 42 degrees. The coolest spring became even cooler because of the rains. But the ones at 40 and 42 degrees were not as easily bearable as you think.

The secret to tolerate really hot pools is to start dipping the toes into the steaming water and try to slowly put the whole body little by little. Now, I dream of having my own sulfuric hot springs at home because it’s good for the body. It could prevent me from having a stuffed nose due to allergic rhinitis every morning and that has been proven at my first visit to Mainit in Bontoc (that’s at the northern tip of the Philippines). And because it’s relaxing, I could have dosed off in the pool if were not for my friends who were chatting with me.

Hot springs can increase metabolism. Saying so, I noticed my heart beat became faster after I dipped in the hottest pool. It’s advisable to immerse in immensely hot pools for a maximum of ten minutes. Then splash cold water unto the body briefly to close the pores. 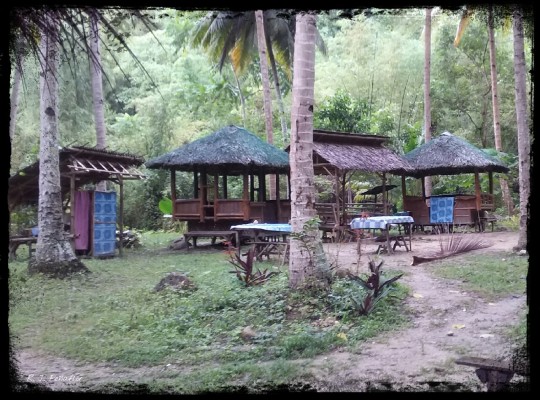 There’s also a message and therapy room which only costs Pho250. Too bad, the masseur was not there. We wrapped up our visit with a refreshing sip of buko juice (coconut juice) and hot pancakes.

I can’t help but stare at the sea as our tour guides, who were also the motorbike riders who chaperoned us to the site, took us back to the bus station. Everything around me was a dream that could only come once in a while. I savored every moment and every sensation that surrounded the great, blue sea that lined the highway because within its waves were good memories of a paradise I knew I’d return to one day.

The tall grass scratched my bare arms and legs as I marched along the narrow, nearly faded trail. The heat of the sun was making me more exhausted as the trees were becoming fewer along the way. I was already lagging behind my friends though we were not yet halfway there. But I was not worried about getting lost. I was worried that my sneakers were about to give up.

These shoes have been my companion for quite some time. I bought them so I could have a nice comfty footwear in Ireland three years ago. Though this pair has been with me in a few adventurous moments, I rarely bring them along at hikes. Only lately, the signs of wearing out were seen on them. Despite of this, I thought it was safe to bring them along to Maranat Falls.

I was expecting Heidi, the friendly dog, to tag along with us again. But since we arrived quite late in the morning, she must have accompanied other hikers who came earlier. 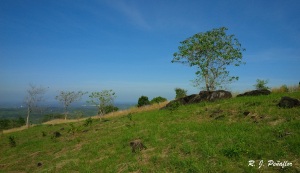 Though most of the area along the mountain was almost bare and isolated, it was slowly

Seeing Norzagaray, Bulacan beyond the mountain

being developed as a habitable place. A few cottages can be seen, surrounded by landscape and little vegetable gardens. As the trail elevates, we could view the town of Norzagaray in Bulacan opening before us. Going further, the trail becomes more isolated and grassy.

Catching up with my friends, my shoes could not keep from being totally worn-out. At last they gave in, like twins crying out with their tongues sticking out. I tried to reach the waterfalls still wearing them but I could not keep them on my feet soon enough.

When my shoes cried, “Stooop!!”

Fortunately, my friend Riza had slippers to lend me. Not wanting to leave my faithful sneakers behind, I tied them on my backpack. These slippers I was now wearing can have the tendency to become slippery when wet. Good thing the ground then was nearly level and dry. But when we were near the falls, that’s where I had to be extra careful.

Mt. Maranat can be seen behind me. Almost there!

Lans and Rozi had already reached the falls by then, as they were quicker than us. Riza was also being extra careful while using a sturdy stick to support herself, as it was her first time to hike. Our tour guide, Mang Macoy, who was quiet most the time, had to assist me going down. I feel

pathetic at this, especially I am the one always assisted by tour guides and most of them were thinner than me. The trail downwards was becoming steeper and slippery. More thorny plants were clinching on my clothes and bag. I felt more exhausted, thinking that it would take an eternity reaching those falls.

But part of me wanted to jump off those rocks at the sound of trickling water. The falls! The falls! I can’t wait to dive into the cool water. Upon coming there, I had a sigh of relief. It’s better than discovering hidden treasure in a clandestine jungle.

We ate our lunch beneath the lush, green trees upon reaching the falls. I suddenly felt sleepy when the cool air surged on my tired muscles. Putting my backpack beneath my head and stretching my legs upon the cold, bare rock, I was lulled to sleep. The rest of us did the same, invibing nature into our souls. Oh, this is a dream come true! 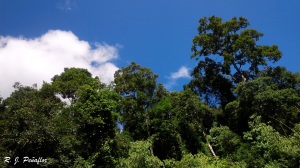 Such is the view when you lie beneath the clear, blue sky

When we woke up, I lost my urge to dive into the pool. I dipped my feet into the cool waters for a while, washing the tiny scratches on my legs. But I couldn’t bring my whole self into the water as it was too cold for me. Riza also watched from afar, too tired to bring herself down into the pool. We just waited for Lans and Rozi who had jaunted nearer to the falls to take more pictures.

Posing at the brook near the falls

It was time to go back home. Once again, I was lagging behind. I was slower than before, perhaps because I did not have the time to work out. We’d have short breaks one at a time. But at one of those breaks, we noticed that one of us was missing.

Since we were already quite distant from one another, Rozi walked along the wrong

When power ladies survive the hike 🙂

detour. She struggled to find a way out, which was already a dangerous trail. In the end, she cried because of the possibility of being left alone at night. By then, Mang Macoy was able to find her and bring her back.

Weeks after this hike, Lans and I discussed that we need to have training on first aid and other survival management skills. We realized it’s time to discard that tourist mindset when going on a hike. There’s always the possibility for the need of survival at these kinds of travels.

Towards the end of this hike, Riza and I lagged totally behind the group. Twilight was already there, and we could already see the stars peeking on the open, purple skies. It was totally dark when we came at the little baranggay hall at the quiet town of San Jose Del Monte. The town was almost completely covered in darkness. The light from the lamps looked like distant stars tucked away in those small houses. 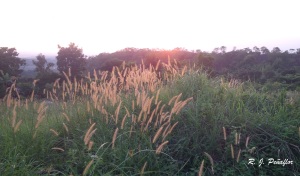 I felt that we were in twilight zone when we rode in the tricycle. The road was eerily dark as we chugged along the rocky road. Yet, as the tricycle driver said, the people here are contented with their state of living. As long as they have food to eat and live well, there’s no need to strive for more. It’s a reality too far from the reality I know. I will surely miss this place again.

I have to return the slippers to Riza. My worn-out sneakers are back on my feet. But I still felt comfortable wearing them again. No matter how worn-out something may be, if they carried good memories with you, it’s not easy to throw them away.