Train Up A Child In the Way He Should Go… 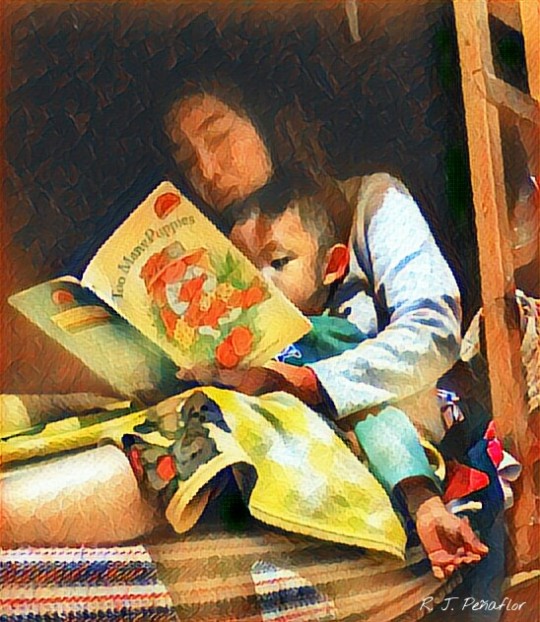 Little Judah was already tired. He’s just three years old and he had this long, unwavering patience not found in most children. Lans had to tag the little boy with us because she was his babysitter for the day.

“Ban-og ka (Are you tired)?” she asked Judah in Ilocano.

The little boy shook his head a wee bit as we were trudging along an inclined path. Still, she lovingly gave him a piggyback ride on her back.

I was impressed with this little boy. He has been with us in an event full of adults, an almost childless place where he could have the right to be bored and display social tantrums. But I did not hear him whimper a sigh of complaint. I have noticed that this has been the personality of most Igorot people – they are not pushy and they are very kind. I wonder how well they were raised as children. I could see that Lans and with the other adults around him are raising him well.

Most parents today, especially those who the Igorot people would label as lowlanders, are quite confused with the thin line of discipline and cruelty, as well as kindness and spoiling children. I find some parents not being aware that their way of discipline is actually destroying them.

I had observed how some parents would berate and try to embarrass their children in public by calling them “stupid”, “fool”, or “useless”. A former colleague felt sorry for a three or two-year-old who was berated by his father by blurting out a curse just because the child accidentally spills his drink inside the jeepney. Parents who would scold like that would never discipline a child because they are just declaring who their children might be when they grow older. They usurp their authority as a parent because they don’t realize there is power when they are declaring names over their children.

I must admit I don’t like children who do not regard their elders around them. There was a five-year-old girl who did not give me a mano (the Tagalog tradition of children placing their elder’s hands on their forehead as a sign of respect), despite her mother nearly screaming at her to do it. In return, I could not help but glare at her threateningly to set down her utensils because she was already waving them before our faces (despite her mother screaming at her again). Most of the times, screaming and shouting is not the way to discipline them. I guess children are tired of their parents’ screams so they would taunt them by closing their ears. A sincere heart-to-heart talk is all they need because they need to understand the consequences of their actions.

Let me go back to little Judah. Now, Judah has an elder sister named Blessie. At one time, Blessie made drawings on the wall and Judah imitated her. You know how messy a clean wall can become when scribbled by a playful kid. Lans, in her patient nature, set aside Blessie and talked with her gently.

“Did you see the drawing on the wall?”

“Did you see what Judah did after you wrote on the wall?”

No long sermon needed. By the sound of her question, Blessie understood her mistake. She nodded without a word.

“Do you see it’s wrong to draw on the wall?”

“That’s right. You should be a good example to your little brothers because you are their ate (elder sister). So be careful with what you do. Ok?”

No raising of voice. Words were just spoken calmly like the morning waves of the sea. But it deeply strikes the conscience like an arrow. Blessie did not leave any marks on the wall anymore.

It’s tragic when our lighthearted culture dictates it looks cute when small children display tantrums around elders because they look funny. But tolerating that would only tolerate rebelliousness. That’s why when parents correct bad habits by the time children are older, these kids snap out of it and slap it back on their parents’ faces.

Much needed to correct in the way we correct our children. Somehow, most parents in my generation are not used to be disciplined because they belong to a generation waning away from the strict authoritarian rule exuded by our much older Spanish ancestors. They have created their own way of discipline. There is a need for parents to be aware how to discipline their children well without removing love out of their system. There is a greater need for parents to learn how to pass down good traits to their own children in a well-mannered and disciplined way.

I have this sense that our culture has a big factor in the way we react to correction and discipline. Truly Proverbs is already advising us to “Train up a child in the way he should go, and when he is old, he will not depart from it.” If we instil into them the wisdom to do what’s right at an early age, they will embrace it as they grow up. When we discipline them in the correct way, they will grow up as good-mannered citizens. With this, we can be proud of ourselves and with them, because we are adding up another history maker in this generation that needs deeper understanding on what is right or wrong.

Recognizing the Leaders of Our Society

It’s really hard to break old habits, but how more much to break stubborn pride. I must admit, I always have a hard time when my character is refined, especially when you’re talking about breaking pride.

There’s a stubborn, little rebel in me that always wanted to break free from authority, whether in the office, at church, or at home. No one is perfect, not even our leaders, and it is not at all times that we would agree with one another. But true enough, it is here that God tests us on how we deal with our authority.

Studying the Nazirite Training Phase 1, I looked back to the topic “Submission to Authority”. Until now, this is the phase that the Lord is still dealing with me. I’m usually quiet but deep within I love to criticize. But the Lord reminds me that it is not my business to criticize a leader’s fault. The issue is how I respond. Let’s take a look why we should recognize the authority of our leaders in society:

Leaders are appointed by the Lord: Hebrews 13:17 says “Obey those in authority over you for they give account for your souls”. We have no right to question why such are in authority. The Lord has a reason to put them in place. Whether it’s a tyrant or a very impressive president, only the Lord has the right to promote or demote him (Psalms 75:6-7).

We are a generation in need of fathers and mothers in society: Although God is the central point of authority, he has placed people to lead in various aspects in our lives to guide us (Prov. 15:22). It does not mean that He can’t handle us. They are there as a guide and they are like the shadow of His authority. But that does not mean they are perfect. Yet, their imperfections should never be the reason that we should disrespect them.

Rebellion and disrespect lead to one’s breakdown: There are many instances in the Bible that a person falls because he disrespected those who was in authority over him. Ham, whose family line was cursed because he “pointed a finger” at his father, Noah, who was drunk one time (Gen. 9:20-24), the former King Saul, whose promised kingdom was taken away when he sacrificed the offering himself without waiting for Samuel (1 Sam. 13:5-15), and Eli’s sons who died early because of the wicked deeds they did even though they were serving in the temple of the Lord (1 Samuel 2:12-36). In fact, the Bible has a promise to those who will obey their parents: “Honor your father and your mother, so that you may live long in the land the LORD your God is giving you.” (Exodus 20:12) Yes, disregarding authority can lead to loss of inheritance and even death. But look at the lives of those who regarded those in authority: David, to whom the kingdom was handed down to him by the Lord because of his respect and love to Saul even though he was an object of his murderous obsession (1 Samuel 24), Nehemiah, who found favor to rebuild the temple as he regarded the authority of a secular king (Nehemiah 2:1-9), and Daniel, whose life was always spared from great harm, as he honored the authority of non-Jewish kings (Daniel 6:10-28). See the paradox? God’s rule is simply black and white. No in betweens. Obedience mean life and gain. Disobedience means loss and death.

But the Lord is merciful. And I am under refinement on such things. Our generation can never stand as leaders if we never regard our leaders. Society falls when the people rebel. What more if we disregard God’s authority over earth?

May we learn how to regard those in position regardless of their character. May we learn how to yield and to react in love and respect regardless of their imperfections. And may we grow in grace as the Lord hone us to become the leaders of this coming generation. Lord refine us to be like You. We can never take our position if we are not willing to be broken from our own will. Let Your will be done in us as it is in heaven.