My two-day Baguio getaway was brief yet blissful, momentarily pulling me away from the reality that nearly freaked me out of my sanity. What came after my first BenCab Museum tour was a visit to a missionary friend I have not seen in years, a short walk in the night-cloaked city outskirts, and a moment of fellowship at my friend’s church the following day.

The city lights glitter on the hilltops at night. Baguio is just one of the places where you can safely stroll at night

I emerged once again in the homey ideals that these lovely people hold, while vainly trying to understand Ilocano dialect. Competition was unlikely to begrudge the existence these people delve in; too far with what we Manileños strive for everyday. Little by little, urbanity has been setting in Baguio City for years. Yet, the unyielding purity of the city’s outskirts is just one of the million things that amazes me in this place.

The main reason for going up alone to Baguio was a small mountain my friend was telling me days ago. On the day I was to leave Benguet, I had the chance to go on a short trek on what they named as Mt. Jumbo. It was located at La Trinidad, a city beside Baguio, also best known for its strawberry farm. We planned to start the trek right after lunch. But due to the slow, incompetent service of a diner we came upon, we were able to leave for La Trinidad at past 3pm, a few hours before the sunset kicks in.

Part of the view while going up to the summit of Mt. Jumbo

It was an easy trek, but my legs became easily strained after ascending a number of those small but steep man made steps. This is the consequence of not jogging for a long time. The cloistered trees, fresh air, and clear blue sky refreshed me though. Upon coming near the summit, the trees became fewer and the air became crispier.

Racing towards the sun

I was surprised to find a few tourists clamoring upon the nearly bare, green, rolling hills of Mt. Jumbo. Some of them had tents set up, anticipating a clear, star-studded sky soon. A group had even taken horseback rides to the summit. We walked passed them as we clamored to the west side of the hill. The vast, industrial fields of La Trinidad opened wide before us, the golden sunshine painting it in bright orange.

Beyond the rolling hills was part of the view of La Trinidad. 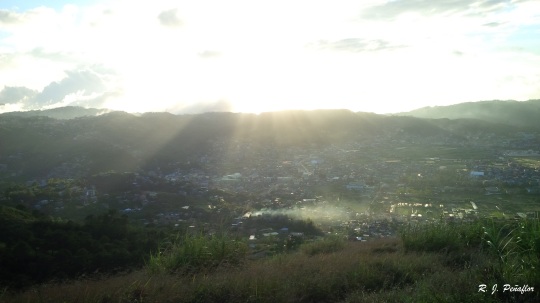 The sunset gleaming over La Trinidad. This area once called the “salad bowl of the Philippines” as it used to be an agricultural area. Now, it is replaced with houses and industrial buildings, striving with the urban shift of the country.

I did not mind my short stay on the summit. In an intense moment of freedom, I did not dance, I did not run. All I did was flap my arms to feel the wind beneath them and watch the sunset descend behind the mountains in awe. But that moment of awe was broken when we tried to catch the sunset with our cameras. 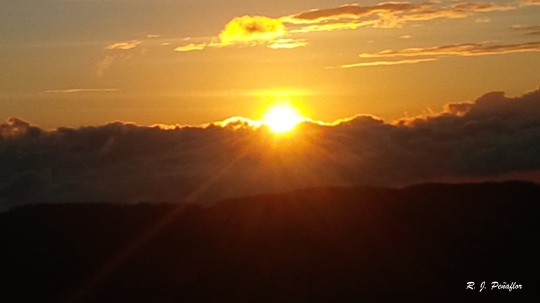 The sun giving us a final breathtaking view for the day.

The sun’s majestic exit was interrupted by the thick silver clouds that canopied over the mountains. Still, the view was breathless, for a sea of clouds surged over the adjacent mountains. It was a phenomenon that no city-dweller could experience everyday. Twilight was not far behind by then. The first sparkle of stars began to blink the moment we left the spot. 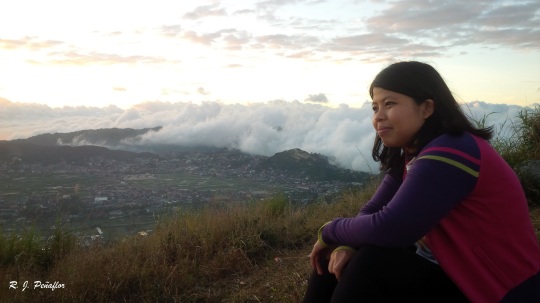 The sea of clouds just behind me

It was a breathless moment. Though part of me knew I had to go straight to the bus terminal right after that trek, I strongly felt that my Baguio experience would not be complete without experiencing a known restaurant at Session Road. With that, I capped my stay with dinner with friends at the fine but affordable Solibao Restaurant. Should you end up hungry at Session Road, this is one of the places you should you drop by.

Capping my trip with a great dinner with my friends Lans, Marian, and Angie. This Pinoy/Chinese group meal at Solibao Restaurant was too much for four ladies and yet it was very affordable.

The bus terminal was jampacked with people leaving for Manila. I was one of them. With me were jars of lengua, choco flakes, and strawberry wine — just some of the Baguio goodies I can’t leave without. As I waited at the line, I just realized that I have the capacity to travel somewhere far without a definite plan and still enjoy good memories of this place. Next stop? I won’t plan it up. All I know it would sure be better. 🙂